A complaint is a legal document filed in a workers' compensation dispute. A complaint can be filed at any time, for a variety of reasons. When someone files a complaint, there are other forms to be filed as well. There is no fee for filing a complaint.

A complaint filed at the WCA initiates the dispute resolution process. A complaint can be filed by a worker, employer/insurer, or an attorney for either party. When a complaint is filed, a mediation hearing is scheduled so all involved parties can be present. Most mediations help the parties reach agreement, but when they do not, the dispute is heard before a workers' compensation judge. The judge makes the determination on how a case is resolved.

Not all disputes need to become part of a formal dispute process. There are some shortcuts. In some cases, parties can get an expedited decision by filing different forms called an application or petition.

Find the complaint form, applications, petitions and other forms on our Forms page.

Once someone files a complaint with the WCA, a mediation conference is scheduled within 60 days. All involved parties must participate. Mediators are attorneys trained in workers' compensation law who strive to bring all parties to a settling of their differences. Mediations take place in Albuquerque, or can be scheduled at a WCA field office, where there will be remote video and audio equipment capabilities so all parties can talk with the mediator.

Mediators listen to all parties in a dispute and consider a possible solution. After the mediation conference the mediator writes a recommended resolution that describes a way for the dispute to be resolved. The recommended resolution is given to involved parties, who have 30 days from the receipt of the resolution to reply with an acceptance or a rejection. If a party wishes to reject the resolution, they must do so within 30 days, or it is deemed accepted. Once a resolution is accepted, it becomes binding. If rejected, the matter is assigned to a judge, who will conduct a formal hearing to resolve the dispute. The majority of workers' compensation disputes are resolved through mediation. 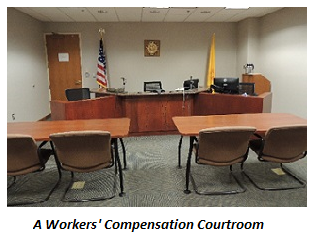 If the mediator's recommended resolution is rejected, a judge is assigned, and the case moves forward toward trial. The WCA's administrative judges specialize in workers' compensation law.

Judges take evidence and render decisions on a case. Workers' compensation judges are appointed by the director to administer the Workers' Compensation Act. They must have a minimum of five years experience as a practicing attorney.

A workers' compensation hearing is a formal court proceeding, and follows procedures similar to those in a district court. Recordings are made and formal rules of evidence are in effect.

By law, judges have the power to preserve and enforce order; administer oaths; issue subpoenas; compel the attendance and testimony of witnesses; compel documents and other evidence; and examine witnesses and documentation.

Once evidence is presented in a case, the judge makes a determination. The decision should be filed within 30 days, unless the time for filing is extended by mutual agreement of all parties.

The decision is called a compensation order and contains findings of fact and conclusions of law. If appropriate, an order for payment of benefits is included. When a party disagrees with a judge's ruling, the decision can be appealed.